Artois Hamilton, of Carthage, was also active in the early history of the town. Mr. Hamilton was thought to hold money bags of considerable size, so the new town was named “Hamilton”, in the hope that the honor might induce him to ‘shell out’. Other names were presented and discussed, including “Bartlett”, ‘Rapids City’ and ‘East Keokuk’, but the possible contribution of money was the clear winner in identifying a name for the town.

John Gordon — the first settler in 1883. Mr. Gordon, his wife Elizabeth, and their two sons, traveled from New Hampshire and built the first log cabin at 240 North 9th Street. The site of the old homestead can still be viewed today. Read more about the Gordon family.
Henry Dickinson, who set up shop in 1849 as a carpenter. In 1850, he and his brother-in-law, Bryant Bartlett, obtained a charter for a ferry between the Keokuk and Hamilton shores. The ferry was successful until “the great iron bridge” was constructed in 1871. Dickinson also served as Mayor of Hamilton, alderman, and as an Assessor of Montebello Township.
Stephen F. Safford, a native of Massachusetts, came to Hamilton with his family in 1856. After a few years of teaching school, they became owners of a small farm. As great philanthropists, the Safford family did a great deal for the City of Hamilton. 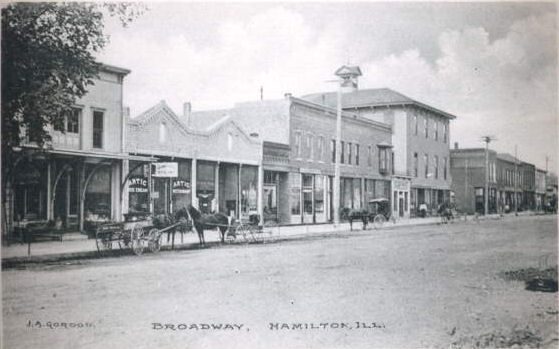 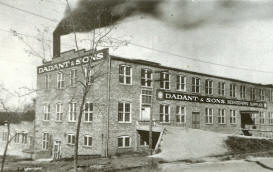 Charles Dadant, “bee-culturist,” came to America from France in 1863. Dadant was engaged in the keeping of imported Italian bees.
Not much is known about Hamilton’s population in the early years, but we do know it stood at 1,200 in 1831 and 1,800 in 1893.

Back in the early 1900’s, it was not uncommon to see cattle crossing the bridge. A gentleman by the name of Mr. Hyndman drove large herds of cattle across the bridge to Missouri. Before the structure was built, a ferry boat transported folks across the river. In 1871 a single deck bridge was built which was to be used for vehicular, railroad, and wagon traffic. There was also a toll house at each end of the bridge, just in case Mr. Hyndman and his cows wanted to go west, just as a train was planning an easterly trip across the bridge.

Built at a cost of $1,005,000, the huge iron structure was a project of the Keystone Bridge Company of Pittsburgh. President of this company was Andrew Carnegie of New York. Opened to the public in June, 1871, it was constructed entirely of iron, except the road bed, which was of heavy-sawed white-oak lumber. It took nearly 2 years to build, delayed at several times by ice and high water. It was 2,194 feet long, and rested on eleven stone piers. Its draw, for the passage of steamboats and other river craft, was 378 feet in length, turned by steam machinery on a pivot in the center.

The rates to travel across the Keokuk-Hamilton Bridge were as follows:

The great bridge met with a mishap on November 4, 1881, when the steamer War Eagle was swept downstream and collided with a pier. An emergency span was needed while a new, permanent span was being constructed. The “emergency span” was what we all came to know as the old Hamilton covered bridge. Damage to the bridge by the War Eagle was $150,000, and to the boat itself, $50,000.

In the early 1900’s, it was determined that something was needed to aid river navigation and harness the wealth of water power inherent in the mighty Mississippi.  A bill was introduced in 1904 which granted the Keokuk and Hamilton Water Power Company the right to construct a dam across the river at the foot of the rapids.  A year later, Hugh L. Cooper, a hydro-electric engineer, took an option to build the dam for $20,000,000. The proportions of this lock and dam were immense: 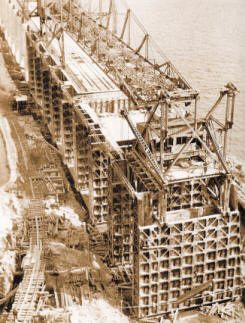 Charles Dadant came to this country from France with his wife in 1863. His primary goal had been to raise grapes for wine. However, due to the soil and weather conditions of this state, the raising of the champagne-type grapes did not look promising. Because of experience in beekeeping in his native land, the enterprising Dadant purchased hives, and built their main source of income around beekeeping.  The business grew and prospered, and in 1925, Dadant bought the large brick building on Highway 136 between Broadway and Main Street where the business is still situated today.

The idea of covered bridges was brought to America from Europe in the early 1800’s. The roofs on the bridges were practical notions, as protection for the wooden spans.  At one time, 10,000 of these structures dotted the US, but by 1960, the number had dwindled to approximately 1000.  At 169 feet, the longest covered bridge in Illinois was the historic bridge here in Hamilton.  Tragically, the bridge was destroyed by fire in the summer of 1969. Used for 2 years until a permanent replacement was constructed, the covered bridge was then moved across a slough of the Mississippi River. This was at the entrance to a road that was parallel to the dike to the Mississippi River bridge. The wooden span had been taken carefully apart and transported by barge where it was reassembled at its new location. At one time, a toll booth was at the entrance to this bridge.

A new roadway was built from Hamilton to the Mississippi River bridge in 1955, which then by-passed the covered bridge and winding road.  At this time, the bridge and surrounding land became the property of the State of Illinois, and was then used for pedestrian traffic only. Situated at the foot of Main Street, the old covered bridge was the approach to Montebello Recreation Area. Prior to 1955, it is said that this was the only covered bridge to carry heavy inter-state traffic, as other bridges were located in rural areas. 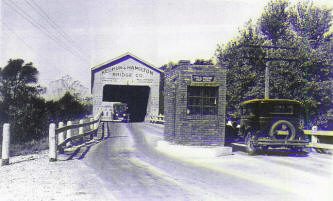 Between 1887 and 1936, 45 new buildings were erected, with business on Main Street thriving. Hamilton’s other business district was (and is now) located on Broadway. There were many stores open for business during this era, including a drugstore/soda fountain, Waggoner’s jewelry store, the Springfield Coal, Lime and Cement Company, and B.W. Elder’s Sale Barn (for horse and mule auctions sales).  Gray’s Store, which handled dry goods, was the “home” of the post office in the 1890’s, and the sidewalks were literally “board” walks.

The 1912 City Directory reflects a booming town, with a multitude of  business and services available.  In that year, Hamilton boasted 10 factories, and no less than 8 grocery stores.  The town was also served by two newspapers — the Hamilton Press and the Hamilton Tribune.

Many other establishments lined the town streets, reflecting industries as diverse as buggies and carriage repair to tailors and millinery.  The town was served by numerous attorneys, bankers, blacksmiths and barbers. For the sweet tooth, there were bakeries and confectioners, to complement the meat markets and Denton’s dairy.  Out-of-towners could choose from 3 hotels for respite, and all could enjoy a picture show at The Gem Theater.

Finally, the livery, the railroads, and Western Union all kept Hamilton linked to the world beyond its boundaries.

Of particular mention is the Riverside Sanitarium, which offered its famous “water cure” for nearly 30 years (1871 – 1900).  The Sanitarium, which was located at the corner of Keokuk and Seventh streets, offered its magical water for diseases of all kinds.  The mineral water was drawn from an artesian well, and could be taken either internally, or used in the forms of baths and massages. The buildings served another purpose from 1910 – 1913, when they housed many of the construction workers for the lock and dam.  Unfortunately, the large structure burned to the ground shortly after the dam was completed in 1913.

The sprawling park on the north side of Hamilton was used by individuals, church groups and other organizations as far back as the 1880’s.  The park was a gathering place for barbeques, pageants, and the Hamilton Chautauquas. The name “Wildcat Springs” was born out of a legend that the last wildcat in that area was killed there.